Casey Rance rolled through the LS Outlaw 275 class for a dominant win, running low e.t. of the meet in the semifinals and taking the final with virtually identical run. Rance, at the wheel of a '95 Nissan 240X, began eliminations favored to win by qualifying No. 1 and easily advanced to the semifinals on a first-round single. The Texas-based driver unleashed a 4.79 at 152.35 mph on the eighth-mile Strip at Las Vegas Motor Speedway, then ran within a hundredth of a second of that time in the final, a 4.80 at an even higher speed, 153.23 mph.

Phoenix's Stephanie Strans started from five rungs lower on the ladder, the No. 6 spot, but picked up the pace dramatically once eliminations commenced. After a first-round bye, she launched with a .057 light (the best reaction time of the entire eliminator) in the semifinals and knocked off No. 2 qualifier Brandon Weber, 4.89/149 mph to Weber's 5.08/148 mph. In the final, in by far the best matchup of the race, Strans, driving an '02 Camaro, improved slightly to a 4.88/151 mph that left her just short of Rance's winning time of 4.80/153 mph. 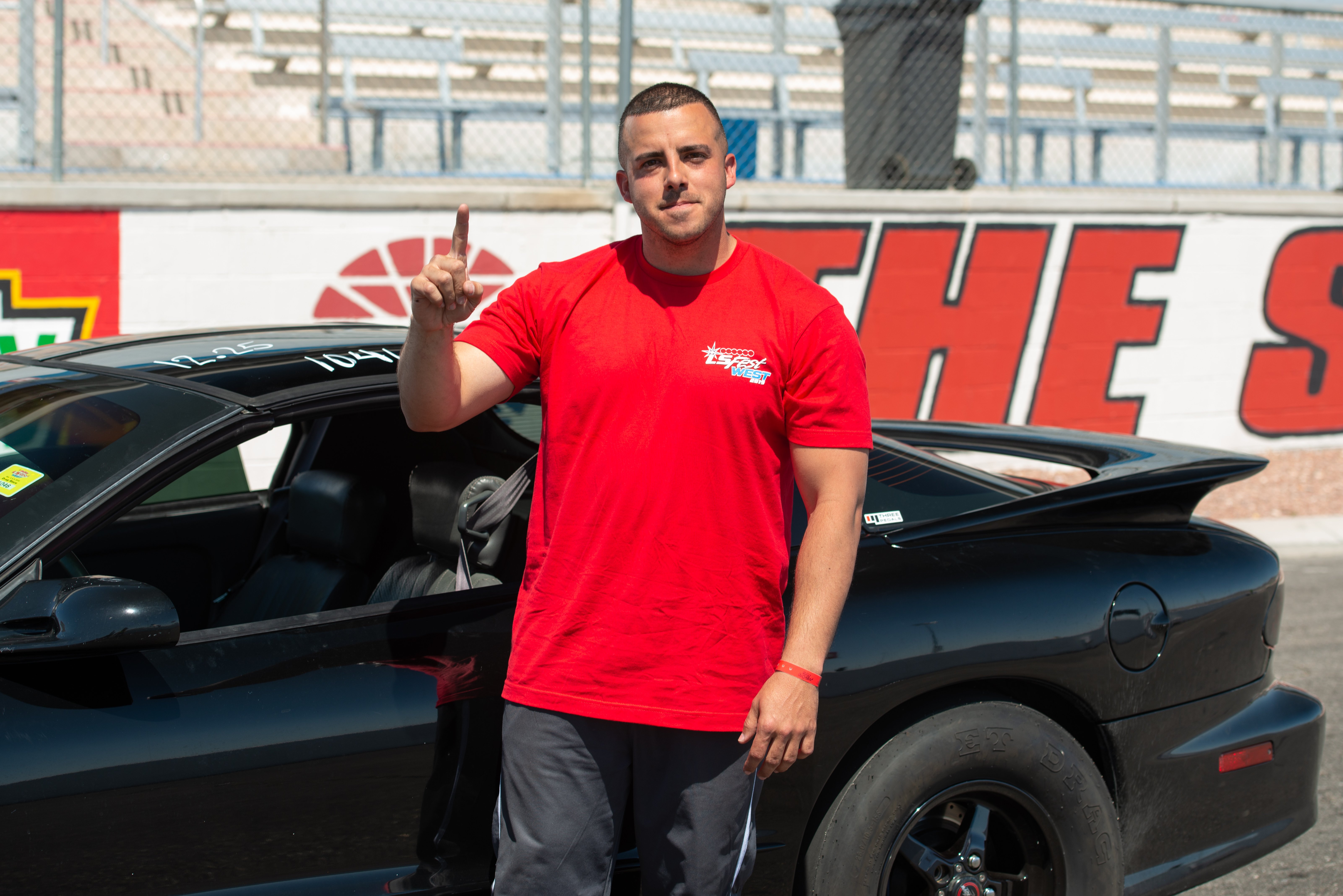 Rance was just as dominant in the Late-Model Heads-Up division, qualifying on top and charging through eliminations with by far the quickest E.T. and fastest speed of all three rounds. Rance, at the wheel of a '10 Camaro, led qualifying by the unheard of margin of nearly seven-tenths of a second even though he shut off early with an 8.36 at a coasting 136 mph. Eventual runner-up Robert Russ was well back in the No. 2 position with an aggregate best of 9.04 at 151 mph in his '10 Corvette ZR1, and Dave Beem qualified No. 3 with a 9.18 at 145 mph aboard his '16 COPO Camaro. Timothy Fuller survived five tough rounds of eliminations to win the biggest class at LS Fest West, LSX Rumble, which attracted a whopping 18 cars. Competing at his home track, the Strip at Las Vegas Motor Speedway, he qualified in the top half of the field with a best of 12.81 on the full quarter-mile, which put him six-hundredths of a second above his 12.75 index. Ontario, Calif.'s Reid Davis led all qualifiers with a dead-on 12.25 on a 12.25 index, Tim Lumbardie was second with a .01-over 12.01 on a 12-flat, and David Calderon rounded out the top three with a .02-over 13.27 on a 13.25.

Eventual runner-up Ricky Morgan of North Las Vegas began the race from the No. 11 qualifying spot (an .11-over 13.36 on a 13.25) and advanced through the first round of eliminations with an identical 13.36 winning time. Driving an '07 Trailblazer, he proceeded to plow through Fredy Benitez, Fernando Barron, and Sean Britzius to set up the final-round match with Fuller, who had eliminated Steven Saunders, Aaron Mueller, No. 1 qualifier Reid Davis, and Devon Buttler to reach the all-important final. There, he got the better start, .167 to .192, and ran a (.16-over) 12.91 at 107 mph for the win over Morgan's close (.18-over) 13.43 at 99 mph. 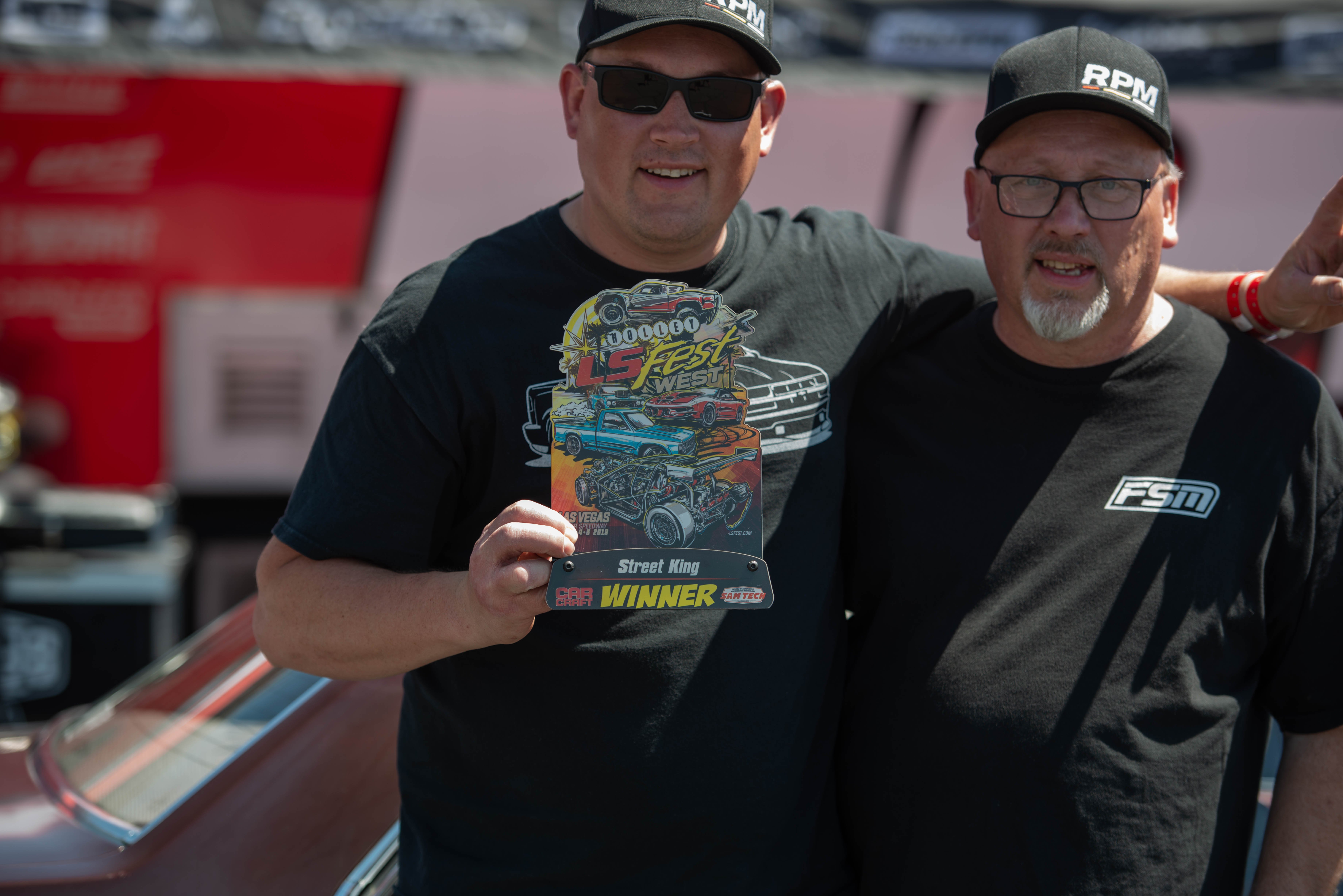 Jordan Vanderwoude had his way with the LSX Street King field, leaving first in every round to win handily. Driving something few would consider a candidate for LS power – a '81 Zephyr – he qualified No. 3 and stuck to a 10.25 dial, running no closer to his index than necessary in order to avoid a disastrous breakout. Behind the wheel of a '98 Camaro, Robert Horton topped all qualifiers, landing just ahead of Miguel Calvillo and Vanderwoude. Like Vanderwoude, Horton and Calvillo selected 10.25 for their indexes.

Calvillo, who made the long tow from Albuquerque, got a break in the opening round when Idaho's Fred Goins, who got a tenth-and-half edge at the starting line, broke out, advancing Calvillo, who crossed the finish line trailing him by several car lengths. Vanderwoude easily dispatched Chris Kay's '09 Cadillac CTS-V in the opening frame and cut the best light of the event to that point, .070, opposite Horton's right-there .074 in the semifinals and collected the win when Horton broke out by a tenth. With the event crown on the line, both drivers cut their best light all day, and Vanderwoude's was the best overall (.061). He won the heads-up affair with a better E.T., 10.58 to 10.76, and Calvillo crossed the finish line with the better speed, 130 to 126. 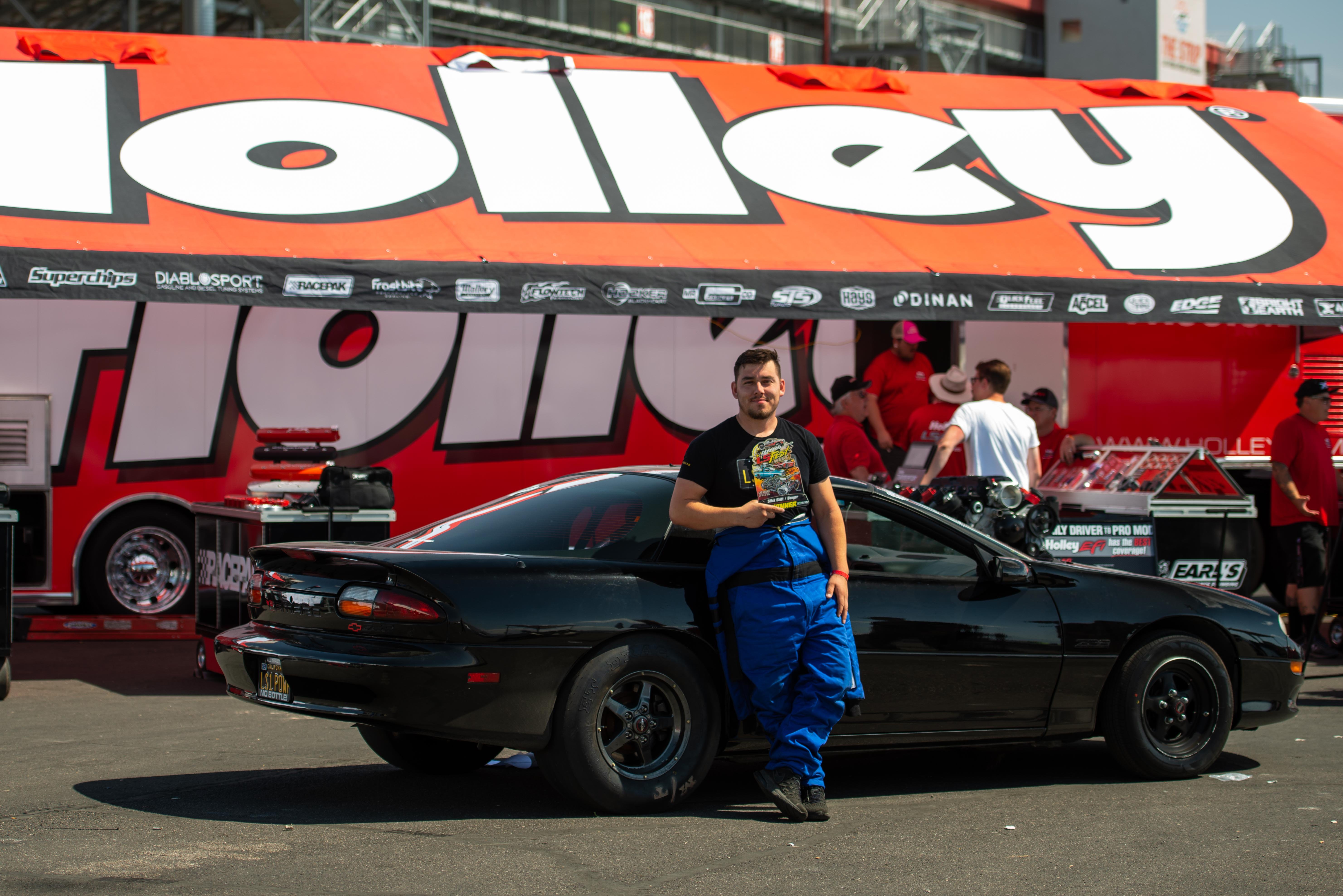 Ricky Ruiz ruled the Stick class until a final-round holeshot did him in, qualifying No. 1 with an outstanding 9.32 at 155.45 mph (top speed of the meet) that afforded him a seemingly insurmountable advantage over the entire field – nearly a second and a half. Ruiz was the only driver to run in the nines in eliminations with a 9.91 at 152.83 mph on a first-round bye run when opponent Joe Granatelli was unable to appear, but it was Bern Mercado, the No. 2 qualifier, who won the all-Camaro final.

With a huge starting-line advantage, Mercado won, 10.40 to a 10-flat. Ruiz was traveling 18 mph faster as they sped through the traps, 150 mph to 132, but he fell seven-hundredths of a second short of running down Mercado for the win. Ruiz coasted to a shut-off 14.81 at 97 mph on the second-round solo he earned for taking the top qualifying spot and knocked off Steve Perez's '06 GTO in the semifinals, 12.34 to a 12.50. Mercado clocked an eased-up 19.48 when Joshua Lora failed to show for the first round of eliminations, stopped Canadian Raiden Higa's '65 Falcon in the quarterfinals, and soloed in the semi's before the big final-round holeshot win.

Hometown driver Frank Yee had everybody in the LS Truck category covered until Kyle Condos swooped in for the win when Yee was unable to make a run in the final. Yee was the only driver in the five-second zone (eighth-mile) in qualifying with a 5.65 at 123.29 mph from his '01 GMC Sierra that stood up all weekend for low e.t. and top speed. No. 2 qualifier Hubert Gromer, Condos, Jesus Mora, and Bryce Hungerford, who barely made it with a 6.999, were the only other drivers to crack seven seconds in qualifying.

As the top qualifier in a field with an odd number of vehicles (15), Yee earned a first-round single. Following a 6.12 second-round decision over Austin Onofrychuk, who traveled all the way from Lethbridge, B.C., to compete, Yee topped Hungerford in a lopsided semifinal contest, 6.33/95 mph to 7.08/95 mph. Condos, of Lyman, Wyo., produced an amazingly consistent string of runs in the preliminary rounds to earn the victory. He erased, in order, Jonathan Williams in an all-Wyoming first-round race, Kevin Leffingwell in the quarterfinals, and Jorge Logono in the semi's with times of 6.62, 6.65, and 6.68 – all at 105-106 mph. 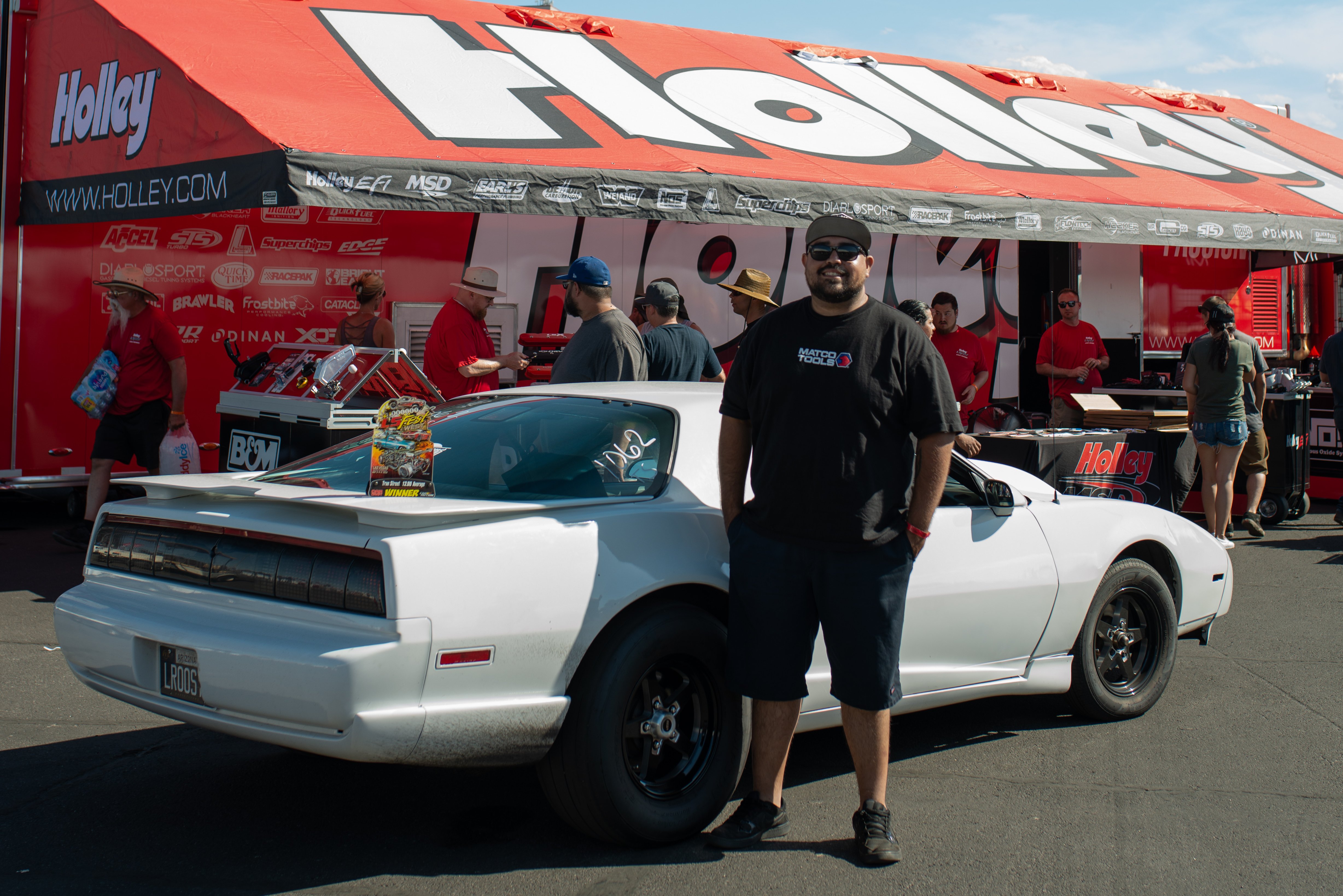 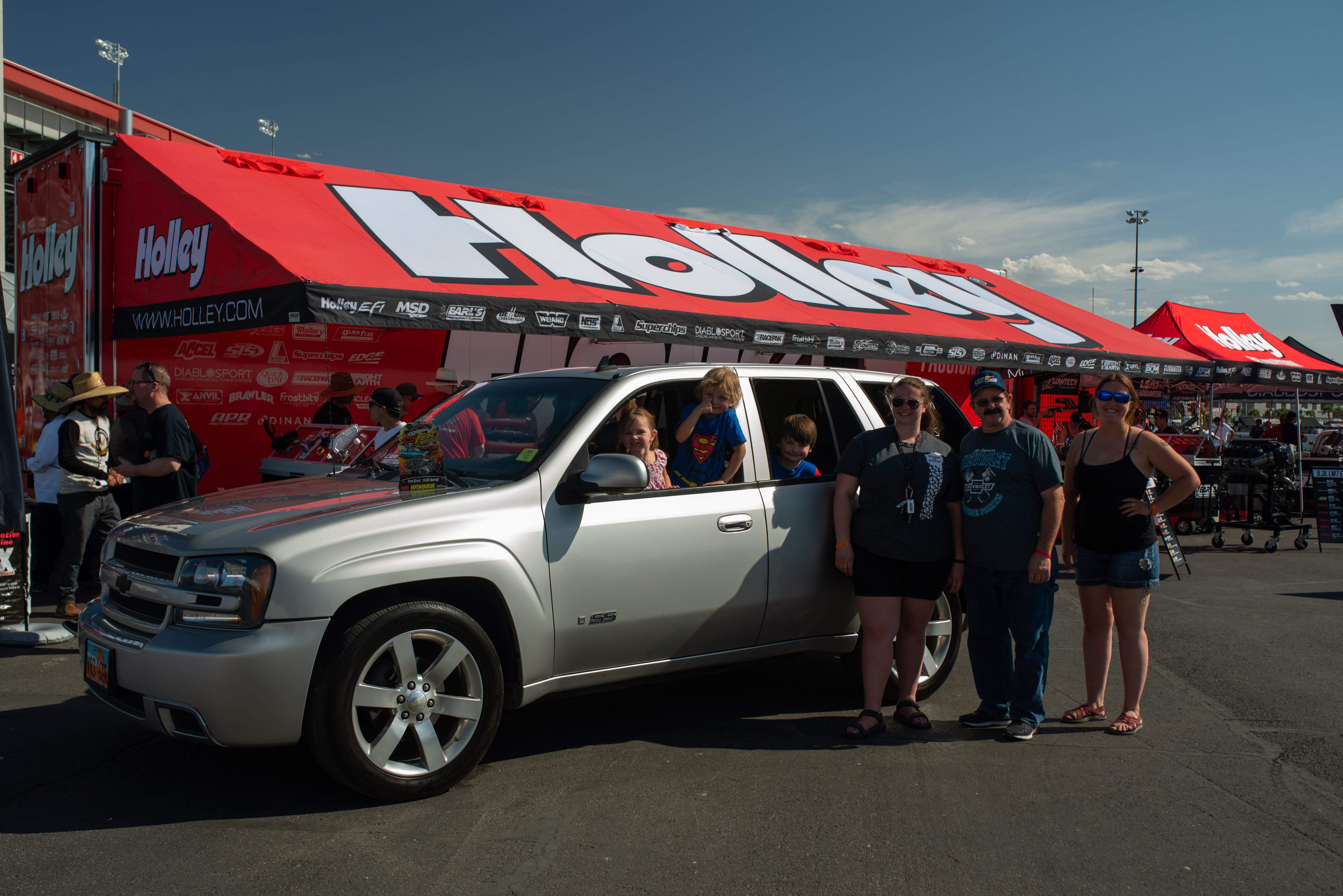