All Birt did in his first outing with superstar Stevie Jackson calling the tuning shots is lay down the quickest nitrous door-car run in history – an incredible 3.60-flat that could have been even quicker. Birt's Corvette was already in the 3.60s on just his fourth run with a "Stevie Fast" tune-up and made the landmark run on just the eighth run. Power comes from a gargantuan 959 cubic-inch Pat Musi engine with Holley Dominator EFI and an MSD Power Grid controlling everything.

The 3.60 positioned Birt third in the 16-car field, the first-ever 16 car field to feature every car in at least the 3.60s, which put him two spots ahead of Jackson, who ended up No. 5 with his screw-blown "Shadow" Camaro. "The timing belt came off or it was going to run who knows how much better," said "Stevie Fast," who declined to project exactly how quick. "People think I blew up his motor, but that's not what happened. It was running fine until the balancer broke apart and hit the timing belt. 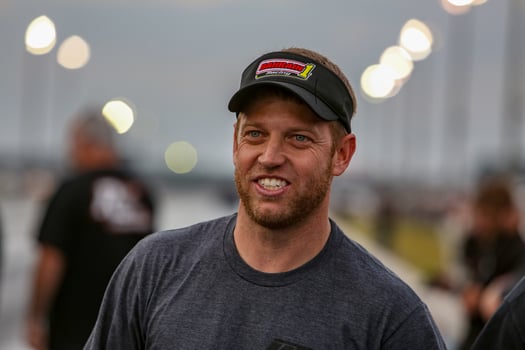 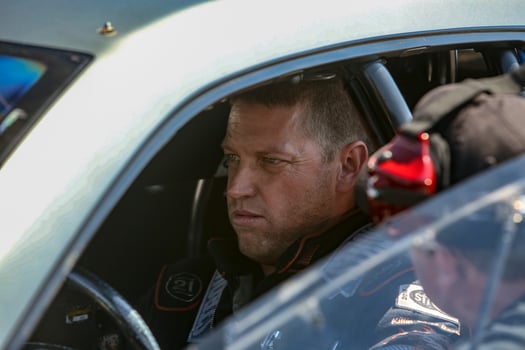 "I haven't even got going on this thing – that's the first race he's taken it to – and I told Marcus I needed to have the car in my shop for a week before we went anywhere," Jackson said. "Nitrous guys are monkey-see, monkey-do, but I don't want know what anyone else is doing. I had him take the jets out of it before it he brought it to me and started from scratch. Holley EFI is the best, most repeatable, easy-to-use system out there, and I've worked on every EFI system in the world. They won't release something until it's perfect, and anybody I know who's used it and understands it wants to run it. I'll just put it this way: If I work on a car and it's fuel-injected, it'll have Holley EFI or I won't work on it, and I'm not just saying that. If there was something better out there, I'd be running it."

"Super Dave" Adkins, who broke the LS record last year with a 3.87 at South Georgia and subsequently lowered it to a 3.86 in Huntsville, Ala., positively blew the all-time mark out of the water this time with a mind-bending 3.75 at nearly 200 mph. Adkins, who also wheeled his Holley Dominator EFI-powered '70 Camaro to the first five-second quarter-mile LS run anywhere last fall in Norwalk, Ohio, outdid himself at Lights Out 2.0, dropping the record more than a full tenth on his last of 10 runs over the grueling weekend. 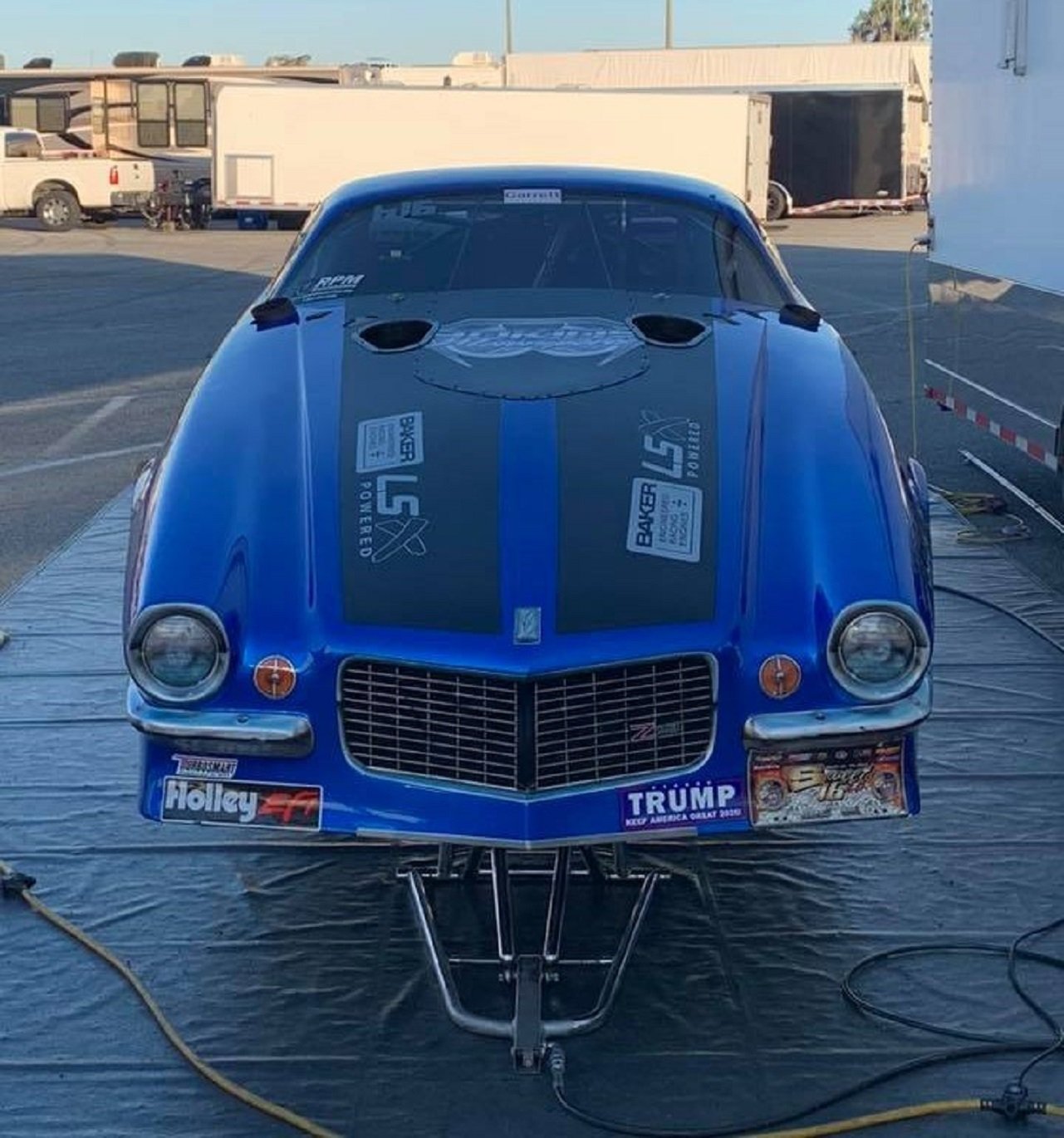 "The thing was making so much power, we had to keep adding weight to keep the front end down," Adkins said. "On the .86 last year, I still had to throttle back about 10 percent for a whole second early in the run. The biggest thing that got the car into the .70s this time was just being able to hold the throttle down all the way for once." Of the 47 cars trying to qualify for the top-of-the-line Radial vs. the World category, Adkins was exactly in the middle, 24th.

"There were only a few small-blocks in Radial vs. the World," said Adkins, who crossed the finish line at 199.1 mph on his record run and hit 199.7 on another. "And this was the only LS. It was incredible what people were running. I mean, a 3.70-something doesn't qualify? We had 12 degrees [of timing] pulled out at eight-tenths [of a second off the line] and left it out for like a second. When the track's prepped like that, these radial cars really get it between the 60-foot mark and the 330. The car ran .953 to 60 and 2.51 to 330, and there's more left, trust me. This combination is really tunable. We're running two sets of injectors and one driver box sequentially, and the EFI works perfectly. This is year three with Holley EFI, and I've never had one problem the whole time." 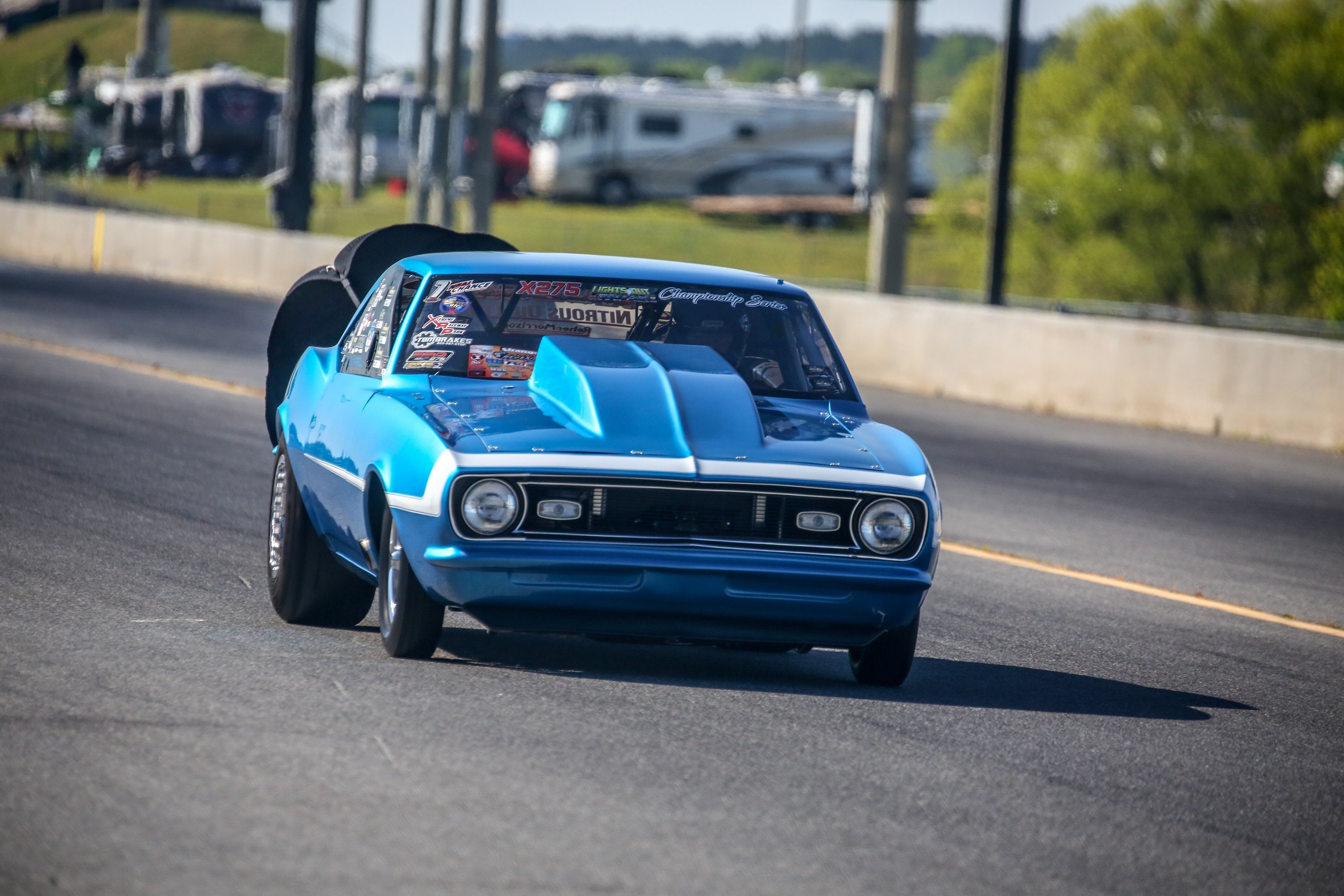 Campbell, a Texas hot rod builder lowered the boom on the all-time nitrous small-block record, wheeling his '68 Camaro to an amazing 4.35. Power comes from a small-block Chevy from the four-time Pro Stock world champion shop of Reher-Morrison that features a complete Holley Dominator EFI setup and an MSD Power Grid. "We've been fighting to get in the .30s since last year," Campbell said. "I ran a .40-flat at the end of the year, but with cars like this you can't just wave a magic wand and pick up half a tenth just like that."

With a close-ratio three speed transmission and a lock-up converter, Campbell travels virtually the entire length of the eighth-mile drag strip under full lockup: Nine-tenths of a second after his thumb comes off the trans-brake button when the Christmas Tree flashes green, the converter is locked up, which makes controlling the engine's massive power that much more important. That's where Holley EFI comes in.

"You can do just about anything with it," Campbell said, "but it's not overly complex with a bunch of things you don't even need like other systems. "The best thing about it is its simplicity. People ask me about it all the time – 'Is that the kind of EFI I should use?' I always tell them other systems can be like a remote control with a million buttons you don't need that just make it harder to get to the ones you want. It's not complicated. The whole layout just makes sense." 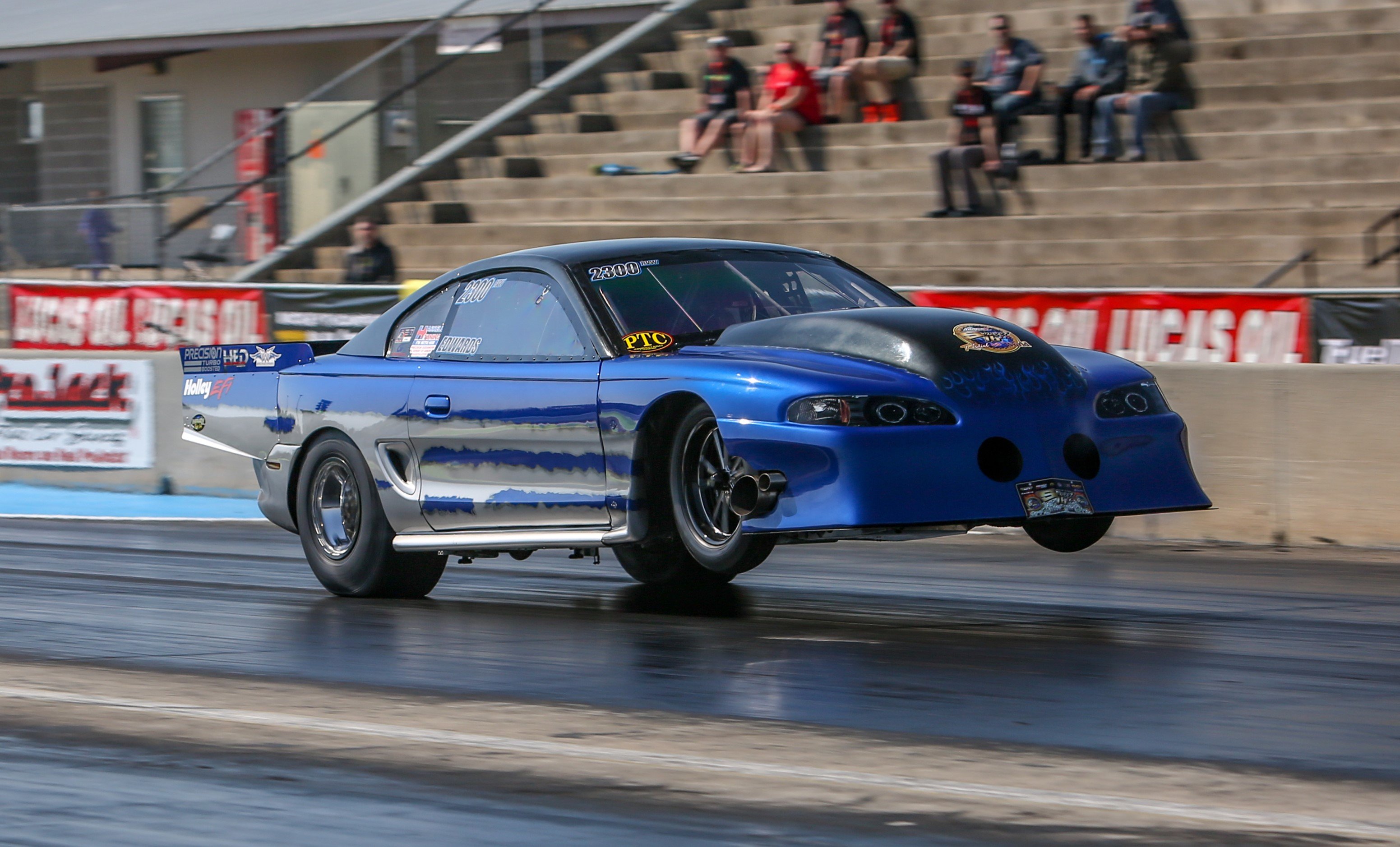 Edwards, the first to run under four seconds with a stock-suspension 315 Drag Radial car with a landmark 3.99, truly outdid himself this time. "To even make the [Radial vs. the World] field was something I never really expected," said Edwards, who ran a career-best 3.83 a month earlier at Lights Out at the same South Georgia facility. "The only reason we even took the car down there was to see if we could run in the .70s." He ended up doing much better than a 3.70-something: an incredible 3.69 that basically leaves him nothing left to prove.

It's not your typical Radial vs. the World car. For power, it's got a twin-turbocharged alcohol-burning big-block Chevy tuned by Peter Harrell of Harrell Engine & Dyno that has cast cylinder heads literally pulled from a dumpster and welded back together. Instead of a built-from-the-ground-up Pro Mod-style chassis, the '97 Mustang Cobra still has a VIN under the dash.

"Looking at the data, knew it could go faster," said Edwards, who runs a Holley Dominator ECU and coil-near-plug Holley HP Smart Coils. "It just kept getting a little quicker, and we just kept adding more weight to the front end. The car just kept doing exactly what we wanted it to because of the EFI. There's nothing we need the system to do that it can't do – it was on the money every single run."

And it's not like Edwards and crew completely revamped the car over the off-season. "The motor rebuilt. It wasn't even freshened – not new rods, nothing. The only thing I did changed was the exhaust valve springs because the old ones had too much pressure and were eating up pushrods. This thing sat on jack stands all winter long until Lights Out, then it sat in the trailer from Lights Out until Sweet 16. This is simply the culmination of everything that I've thought the car could do for two years now."