The entire Holley staff thanks everyone who came out to LS Fest East 2018. Inclement weather surrounded Beech Bend Raceway Park all weekend but ultimately cut short only the Scoggin Dickey Parts Center/Engine Power Drag Racing portion of LS Fest competition. Purses were divided evenly among racers who appeared on an eliminator ladder in all classes EXCEPT Street King and Rumble. Due to the size of those two classes, we're rewarding your participation in a different manner. You'll all be contacted in the coming days – keep an eye on your email inbox for details. Participants in Chevrolet Performance Stock, Rumble, and Street King were rewarded with tech-in points and qualifying points where applicable.

Josh Elam edged out Raymond Gardocki to win by less than a tenth of a second in True Street, which requires all drivers to participate in a 30-mile cruise and then head straight to Beech Bend in vehicles with DOT-legal tires, working lights, and other street-oriented safety equipment. Driving an '09 Corvette, Elam seemed to have the title well in hand until a disastrous spin off the line on his final attempt nearly cost him the victory. After reeling off back-to-back times of 8.48 and 8.64 that covered the rest of the field by a train length, Elam spun hard off the line, recovered, and floored it for an E.T. a full second slower than his previous attempts, 9.64. Gardocki nearly stole the win with metronome-like consistency at the wheel of his '68 Nova (a 9.02 and back-to-back 9.01s), but even with the backpedaling 9.64, Elam averaged an 8.92 for to edge Gardocki's 9.01. 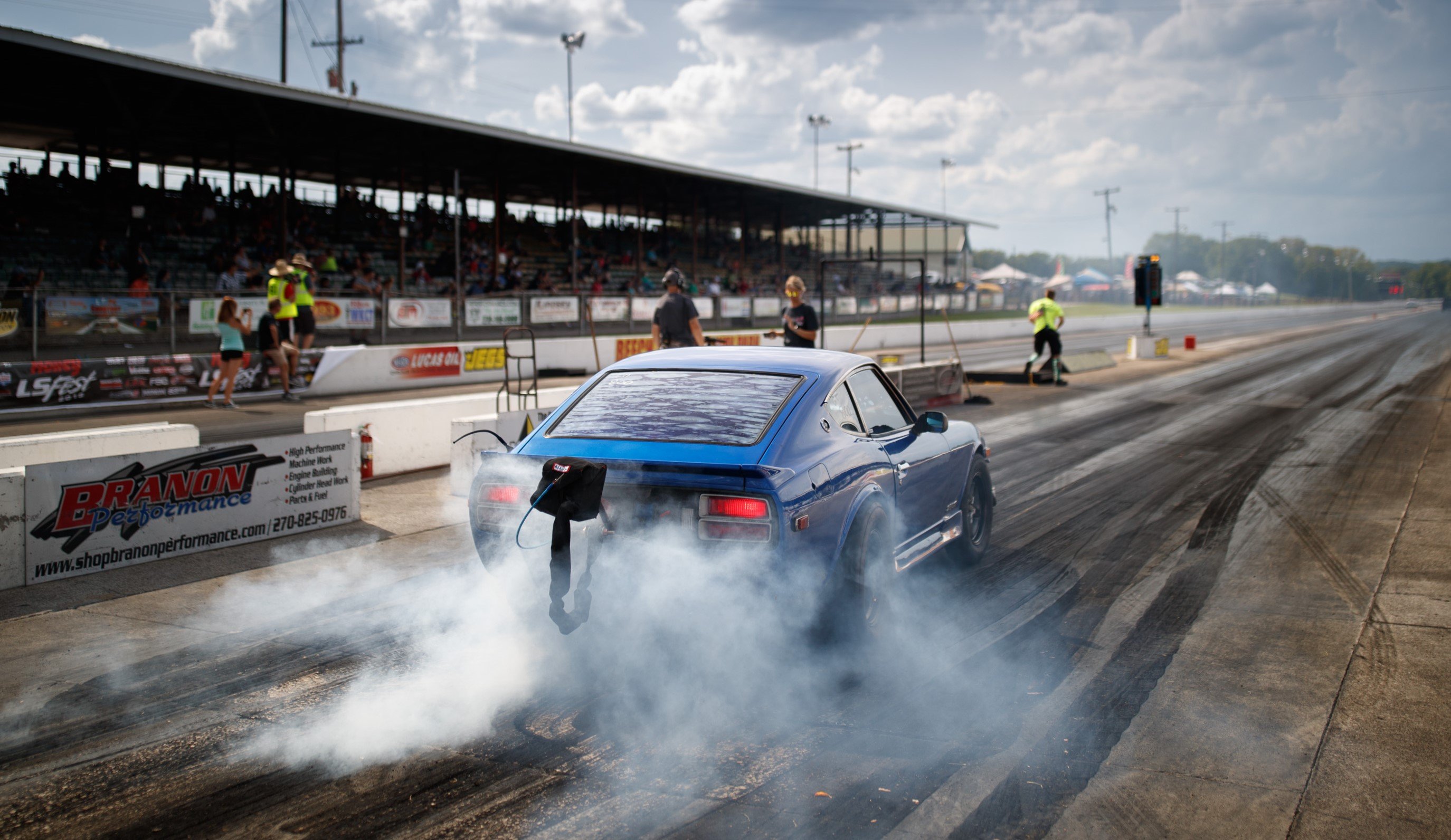 The COPO Battle at the Green, a special class reserved for COPO Camaros, factory hot rods that come straight from GM with Holley EFI systems was nearly completed. The first two of three rounds were run on Saturday, with No. 1 qualifier Jesse Alexandra and Brian Palcisko set to face off in the final. Damien Begler, of Wilmington, Ill., red-lighted at the wheel of his 427-powered '12 Camaro to hand a semifinal win to Jesse Alexandra's Wisconsin-based '17 Camaro. Palcisko, from the Cleveland suburb of Parma, Ohio, won the other semifinal match on a single when Rich Bierie was unable to appear, legging it a couple hundred feet and then shutting down to save it all for the final that never happened. Qualifying was based on reaction times, and Alexandra claimed the top spot with a near-perfect .009, just ahead of former NHRA event winner Darren Poole-Adams' .017.

Before eliminations were canceled, Chevrolet Performance Stock – a heads‐up class designed for 1955 and newer naturally aspirated GM vehicles – was the domain of Muncie, Ind.'s Jesse Wilson, who ripped off a 10.20 at 130 aboard his LS3-powered '10 Camaro to pace the all-10-second seven-car field. Haley Rounsavall was second, just four-hundredths behind Wilson, with a 10.24 at 129 mph in her family's '15 Camaro, and Waynesboro, Pa.'s Shane Stymiest rounded out the top three with 10.38 at 129 mph at the wheel of a 4th Gen Camaro. Every driver in the field managed at least a 10.87 at 125-plus mph.

Derrick Kelly of Loweel, Ark., was the man to beat in Drag Radial, a single-power-adder class for bodied cars and trucks (no open-wheel vehicles or roadsters allowed). Kelly steered his Fox body Mustang to a 4.70-flat at 152 mph to cover the field by 44-hundredths of a second and nearly 10 mph. Chuck Stefanski from Brunswick, Ohio, was a distant second with an aggregate best of 5.14 at 143 mph. Willard, Mo.'s John Schaffer qualified No. 3 with a run nearly identical to Stefanski's, a 5.15 at 138 mph. 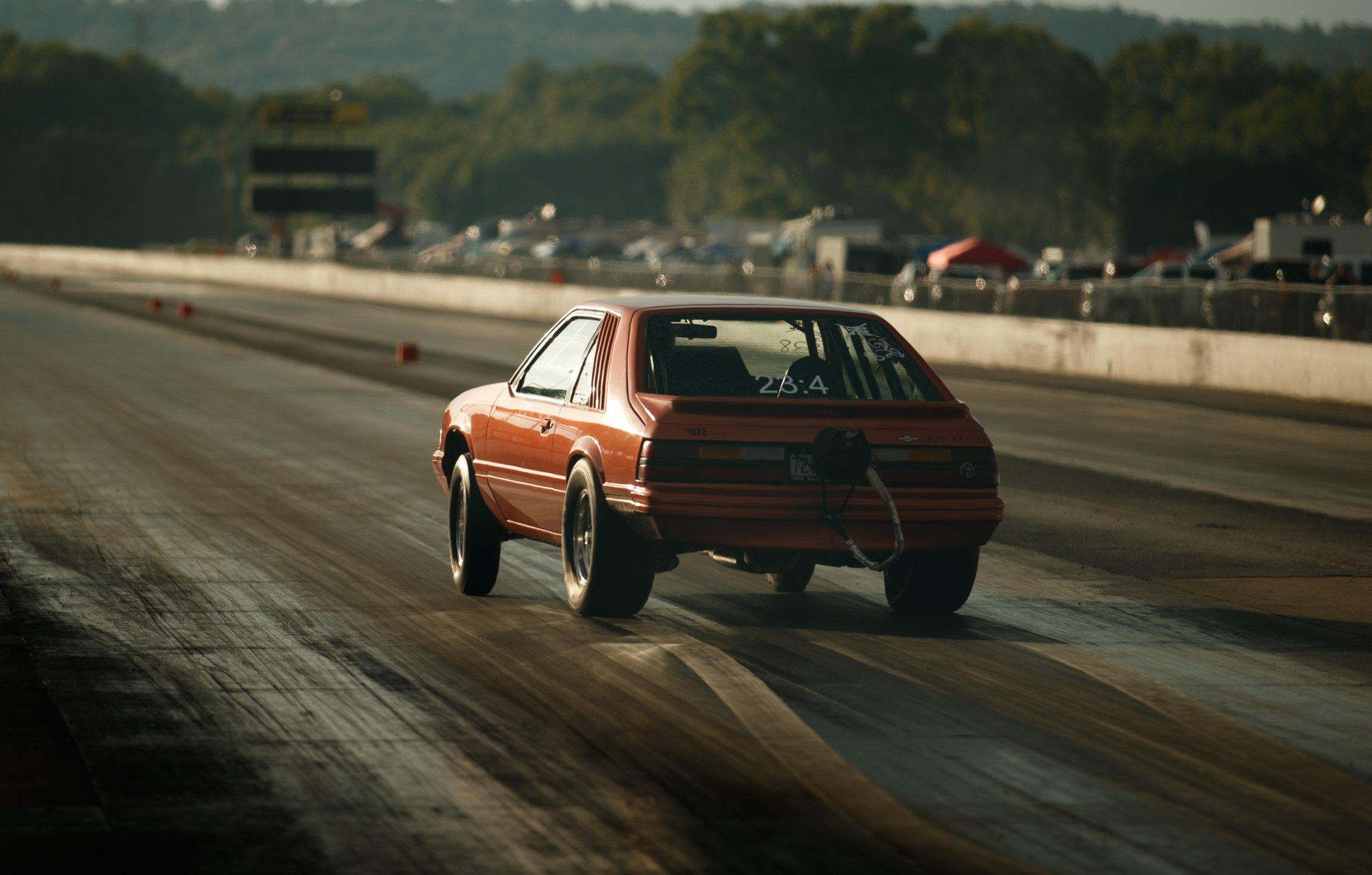 In the Real Street division, which is for LS-powered GM body vehicles running on a 10.5-inch slick or DOT 275 drag-radial tire, David Doremus came out on top of a tightly bunched group, inching out Bill Trovato, Ernie Dampler, and Fran Schatz, who all were within less than a hundredth of him. Doremus ran a 4.77 at 148 mph on the Beech Bend eighth-mile for both low e.t. Trovato, Dampler, and Schatz were right on his heels with respective times of 4.80/148, 4.84/144, and 4.87/144.

John Capizzi topped all qualifiers for the Stock Block Shootout, which, as its name implies is reserved for vehicles with factory GM production engine blocks – no aftermarket, LSX, or Chevrolet Performance blocks permitted. Racing on the eighth-mile, Capizzi wheeled his '88 Mustang to best of 5.04 at 141 mph, becoming the only driver to crack 140 mph and just missing the four-second zone. Joshua Burkhart was second with a best of 5.27 at 136 mph, and Christopher Cantrell placed third with a 5.53 at 139 mph. 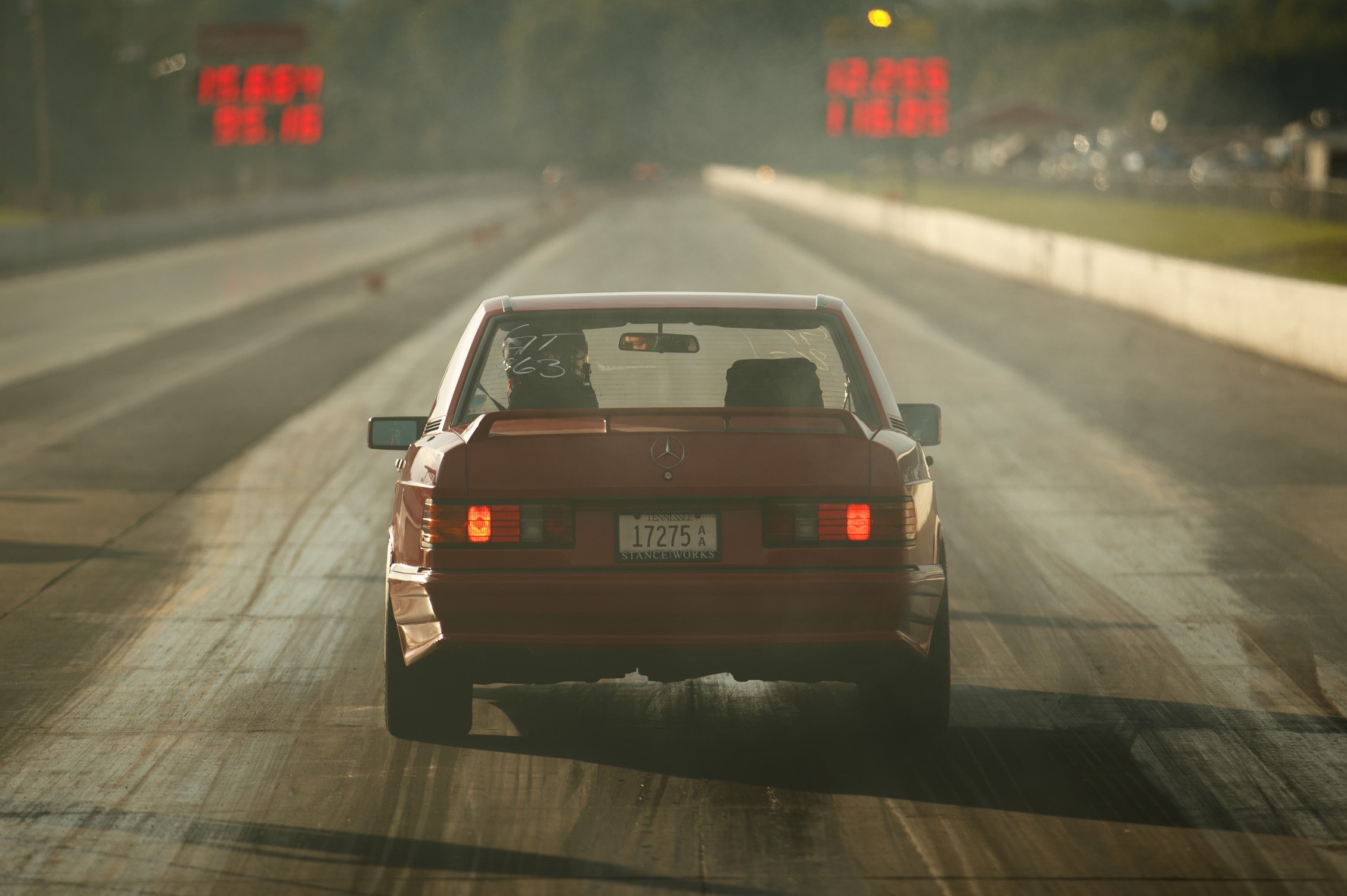 Ray Bulach clobbered everybody in Stick-Shift/Banger, which is reserved for drivers shifting with a clutch-assisted "H" pattern – even Cleetus McFarland himself. Bulach sawed through the gears for an amazing 7.98 at 185 mph on the full quarter-mile at the wheel of his '99 Camaro. McFarland was the only one close to him with an impressive 8.27 at 175 mph in his one-of-a-kind body-less Corvette, "Leroy the Savage." James Short, who clocked an 8.58 at 172 mph in his '02 Camaro, and Jared Caranougher in his '03 Corvette were the only other drivers within a second of Bulach and McFarland and more than a full second ahead of everyone else. 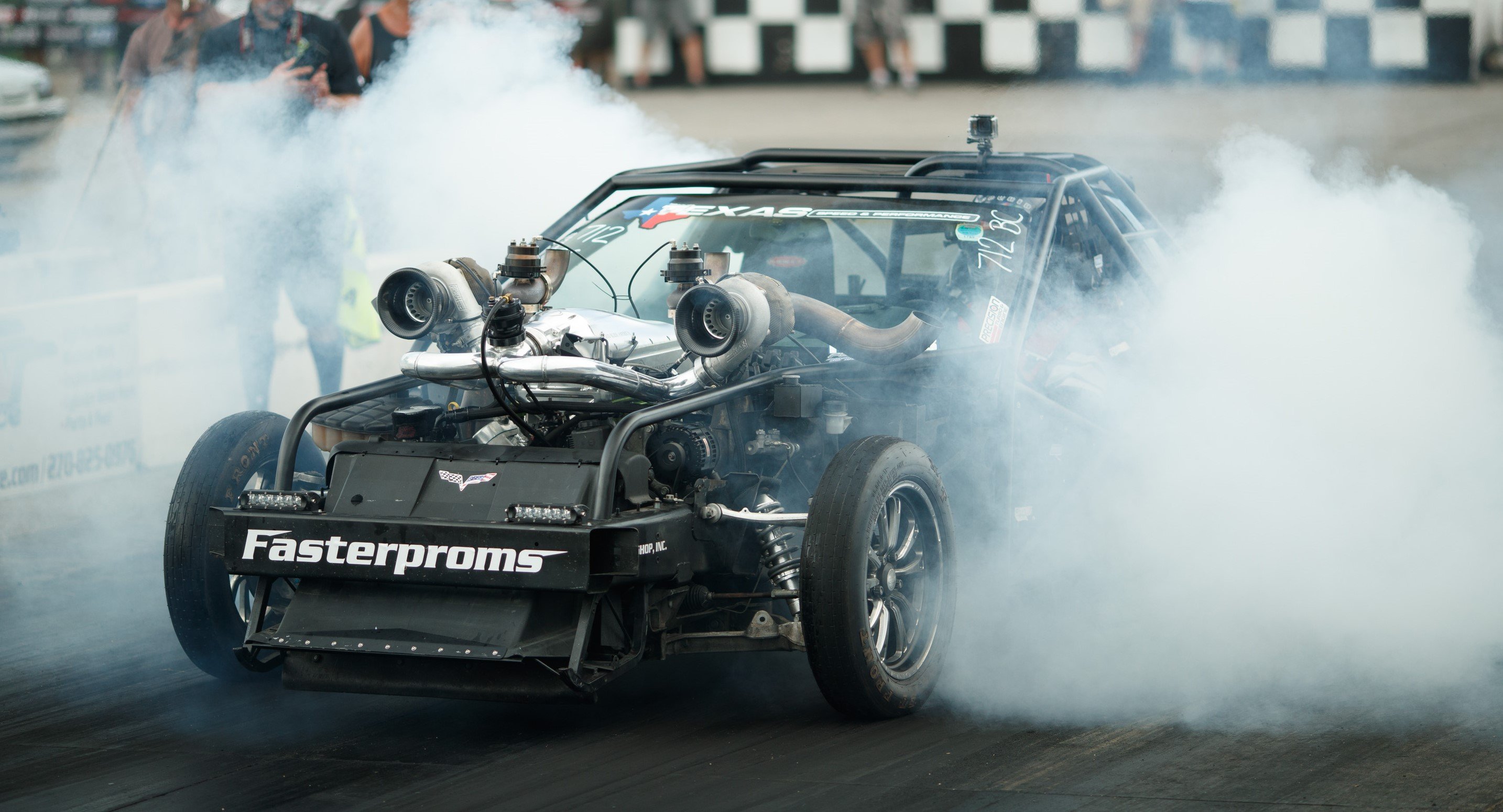