Powered by ACCEL's revolutionary Extreme 9000 Ceramic Spark Plug Wires, off-road star Ryan Beat had the best season of his career in 2018, winning five times to claim the Lucas Oil Off Road Racing Series Pro Lite championship. "This is my first national championship and the highlight of my career," said Beat, 31, of El Cajon, Calif. "I'd been so close for so many years, but this was definitely my year."

Driving his #51 Bilstein Shock Absorbers/KMC Wheels Chevrolet, Beat dominated the Pro Lite class, a showcase for 3,400-pound/500-horsepower 2-wheel-drive mid-size trucks. In 14 starts, he amassed 12 podium finishes, due, in large part, to his ability to finish races strong. "Before we switched to the spark plug ACCEL wires, I'd just melt plug wires all the time," said Beat, who doesn't just drive his truck – he built it in-house with his crew. "It basically made it impossible to finish races or even practice for very long. After the switch, were able to make it through a whole race, then test for hundreds and hundreds of laps before the next race with the same set of wires." 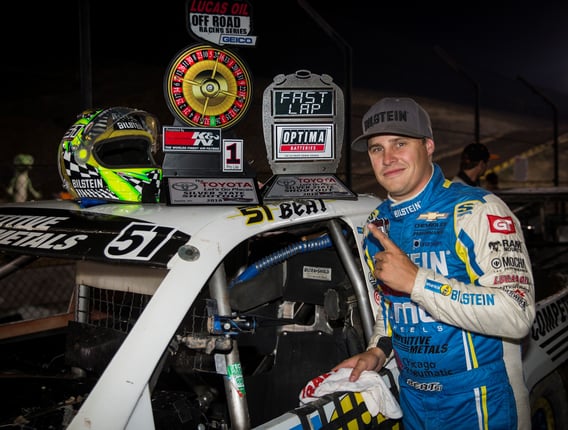 Beat, who won the prestigious Rick Huseman Award and was also named 2018 Driver of the Year, won the very first race of the season at Firebird Raceway in Chandler, Ariz., ruled back-to-back events at Lucas Oil Speedway in Wheatland, Mo., and scored twice more at Wild West Motorsports Park in Reno, Nev. He was quick to credit his switch to Extreme 9000 Ceramic Spark Plug Wires, which stand up to under-hood temperatures of up to 2,000 degrees Fahrenheit. "The stock exhaust manifolds disperse a lot of heat right where the wires are," he said. "We're not just putt-putting around out there – it's constant foot-on-the-floor driving the whole time, and that creates an incredible amount of heat right next to the wires that ordinary spark plug wires can't handle."