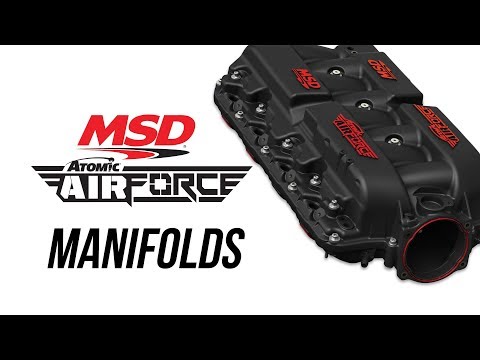 Note: Use of aftermarket rails may require the use of customer-supplied spacers and hardware.

The MSD Atomic AirForce intake manifold delivers improved airflow and distribution to improve the performance of stock and modified engines. The unique bell-mouthed runner entrances maximize airflow and minimize shrouding - all while optimizing the available plenum volume for an unobstructed flow path over opposing runners. The polymer molded 2-piece design allows for easy access to the runners for porting. The Atomic AirForce LT1 manifold accepts OEM Drive-By-Wire (DBW) and aftermarket Big-Bore DBW throttle bodies – as well as cable operated throttle bodies. Auxiliary fuel rails and port injectors may also be fitted for applications where the capacity of the stock Gasoline Direct Injection (GDI) system has been exceeded. The intake is supplied with new OEM-style bolts, but the use of new OEM-style intake port seals is required.

Instructions for Part# 2700
Note: Use of aftermarket rails may require the use of customer-supplied spacers and hardware.