Selecting The Correct Regulator For Your Car Cool Fuel
Bypass pressure regulators aren’t just for EFI.
They improve the performance and reliability of
any street or race fuel system.


Hot rodders definitely know how to prioritize. If forced to choose between keeping their engines cool or keeping themselves cool, installing an A/C system always takes a back seat to heavy-duty radiators and water pumps. While managing coolant temperature is certainly a top priority during the dog days of summer, what about the fuel? Unfortunately, it’s something most enthusiasts completely ignore until vapor lock or a burned up fuel pump brings cruise night to a rapid halt on the side of the road. The good news is that for less than $200, eliminating these potential headaches are as easy as adding a bypass fuel pressure regulator and a return line to any existing fuel system.

Truth be told, many carbureted engines run just fine with a deadhead-style fuel system. These simple yet effective setups position a pressure regulator in between the fuel pump and carburetor. The column of fuel in the feed line deadheads at the regulator, which then holds pressure at a steady 4.5- to 9 psi between the regulator and the carburetor. In essence, a deadhead regulator is merely a restriction in the fuel line that lowers fuel pressure between the tank and the carburetor by decreasing fuel flow. This works just fine in a 400 horsepower crate motor, but today’s street machines easily produce an additional 100-200 hp.

With this increase in power comes a proportional increase in fuel demand, which places additional strain on the fuel pressure regulator and fuel pump. In fact, the fuel flow demands of high output engines can completely overwhelm a deadhead regulator’s ability to maintain steady fuel pressure, resulting in pressure creep, inconsistent fuel pressure, potential engine flooding, and heat. “Even though the pressure between the regulator and carburetor is just seven psi, the pressure between the pump and regulator can build up to 15 psi. That means that the fuel pump is constantly beating on the check valve at 15 psi, which heats up the fuel and can lead to vapor lock,” Zach Baker of Quick Fuel Technology explains.

In contrast, a bypass regulator bleeds off excess fuel pressure, dumps it into a return line, and re-circulates the fuel back into the tank. As simple as this change may seem, it yields a multitude of benefits in both reliability and performance. “Circulating the fuel at a constant seven psi is a lot easier on the fuel system than building up the pressure to 15 psi and having it deadhead at the regulator, especially in a street car. In addition to keeping the fuel cooler, a bypass regulator eliminates pressure creep, and dramatically increases the life of the fuel pump while decreasing noise,” Baker continues. “It’s like cruising down the road at a constant speed versus running at wide-open throttle. Lowering the load on the fuel pump also decreases the voltage it uses. A dynamic, bypass-style fuel system is simply better all around.”

Cooler, freer-flowing fuel is great for a street car, but is a bypass regulator really necessary on a drag car? You bet. Although heating up the fuel isn’t much of a concern in an engine that only runs in quarter-mile increments, the demands of drag racing present a unique set of challenges best addressed with a bypass regulator. Drag cars are often at odds with the laws of physics, and optimizing fuel system performance is no different. “If you’re running a -10AN feed line with a rear-mounted tank, you now have a big column of fuel trying to move backwards as the car is pulling 2 g’s at launch. That can make it difficult to build pressure in the feed line,” Zach Baker explains.

Depending on the needs of each application, bypass pressure regulators provide the flexibility necessary to optimize the performance of any drag race fuel system. “We typically recommend running the feed line directly to the fuel log and carburetor, mounting the regulator off the backside of the log, then dumping the return line back into the tank. This allows the fuel to flow through the carburetor before it reaches the pressure regulator,” Baker remarks. “For a drag car that launches hard, you can plumb in the regulator before the carburetor, then have the fuel deadhead at the carb. If you have a bypass fuel pump, you can use this layout to build 21-23 psi of pressure in the feed line to help it counteract the g-forces at launch. The regulator then provides a steady six to seven psi of pressure to the carb.”

Additionally, data logs taken from cars equipped with bypass pressure regulators reveal a smoother and much more stable fuel pressure curve compared to deadhead fuel systems. The reason is simple. By constantly circulating a steady supply of fuel throughout the fuel system, a bypass-regulator can react more quickly to sudden changes in engine load. This not only eliminates potential lean spikes, but it also does a better job of keeping the fuel bowls full all the way down the track.

The beauty of converting from a static (deadhead) to a dynamic (return-style) fuel system is that it only requires adding two key components: a bypass pressure regulator and a return line. By following just a few easy tips, anyone can make the switch in less than an afternoon of work. “It’s best to mount the regulator as close to the carburetor as possible,” Baker advises. “Fuel moves faster at 15 psi than it does at six psi. The shorter the fuel line between the carburetor and the regulator, the faster it’s going to fill back up with fuel and react to changes in engine load.” 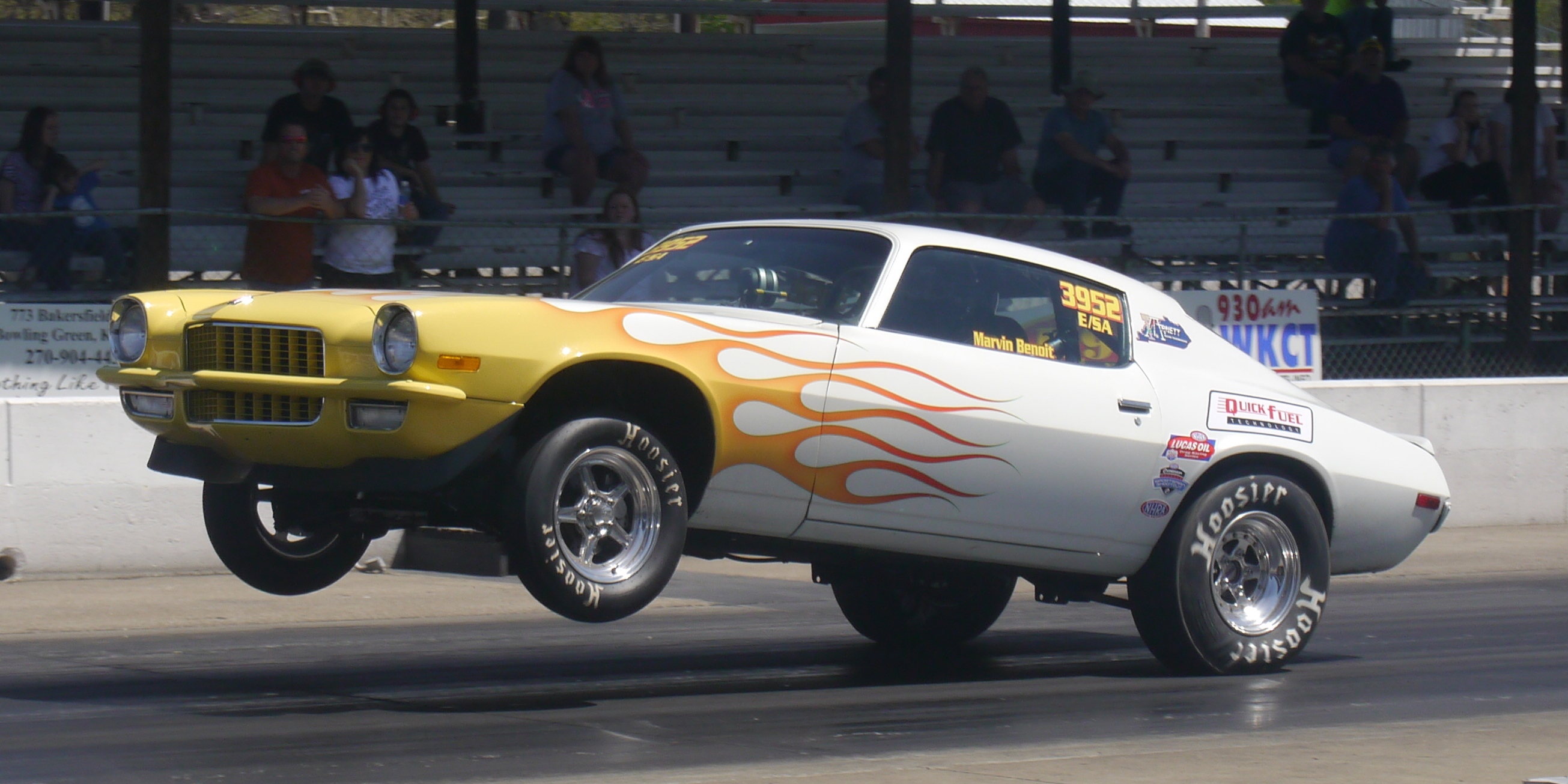 Even carbureted engines can benefit from a bypass fuel pressure regulator. Plumbing it before the carburetor can help increase line pressure during hard launches while still maintaining 6-8 psi of pressure at the carb.

In street/strip applications, positioning the pressure regulator on the backside of the fuel log allows fuel to flow unrestricted to the carburetor. In drag cars with rear-mounted fuel tanks that launch very hard, it may be beneficial to position the regulator before the carburetor. 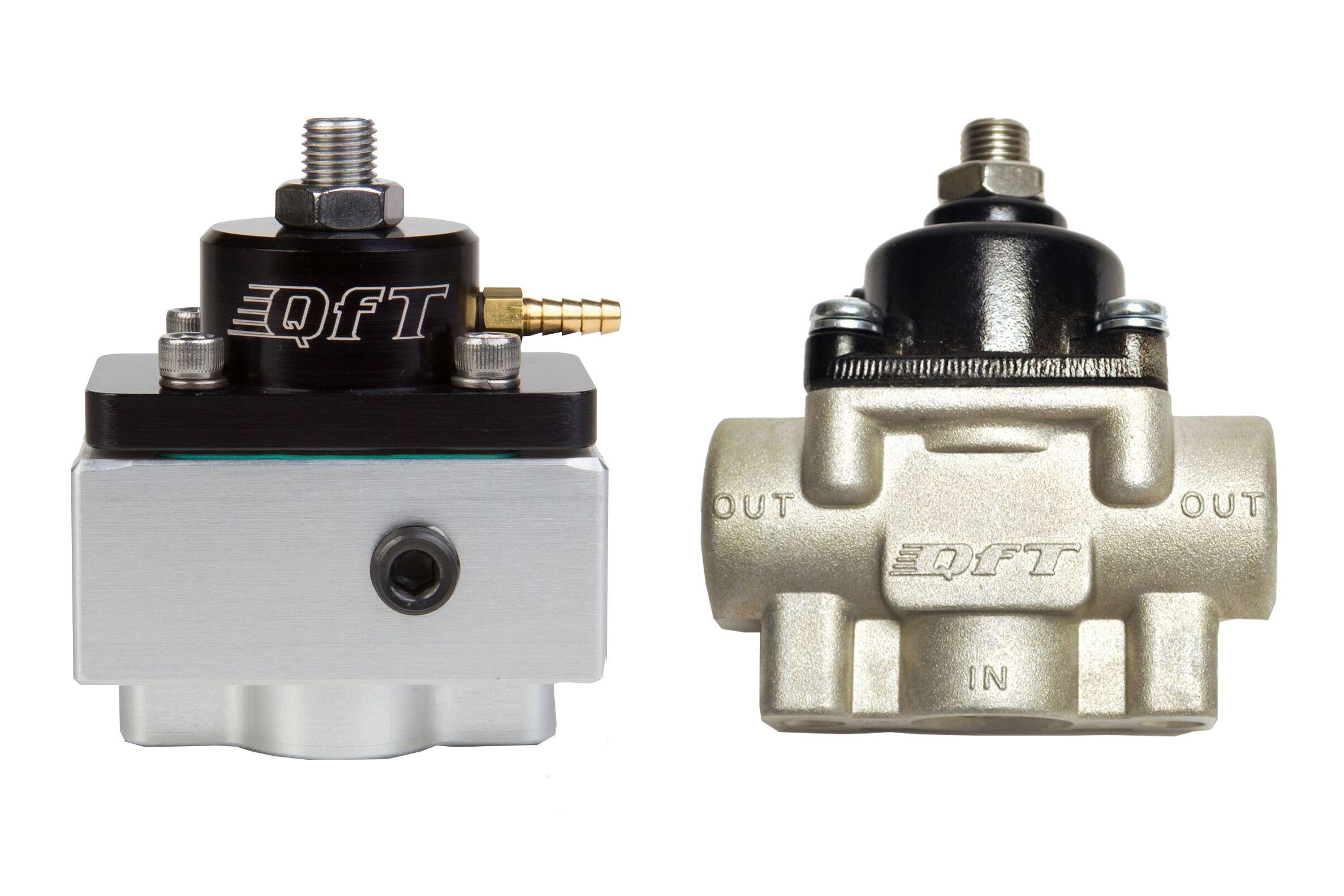 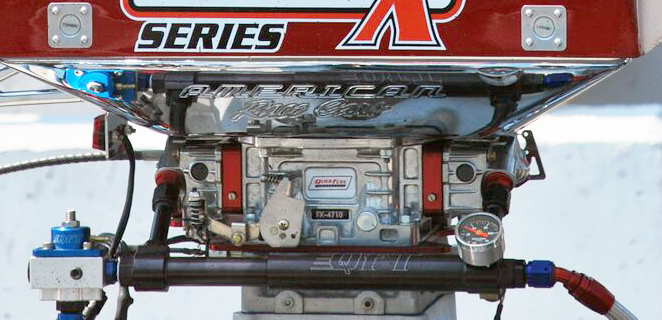 One of the most common mistakes when designing a fuel system is using a return line that’s too small. This results in excessive backpressure, which makes it nearly impossible for the regulator to bleed off enough fuel to keep line pressure in check. 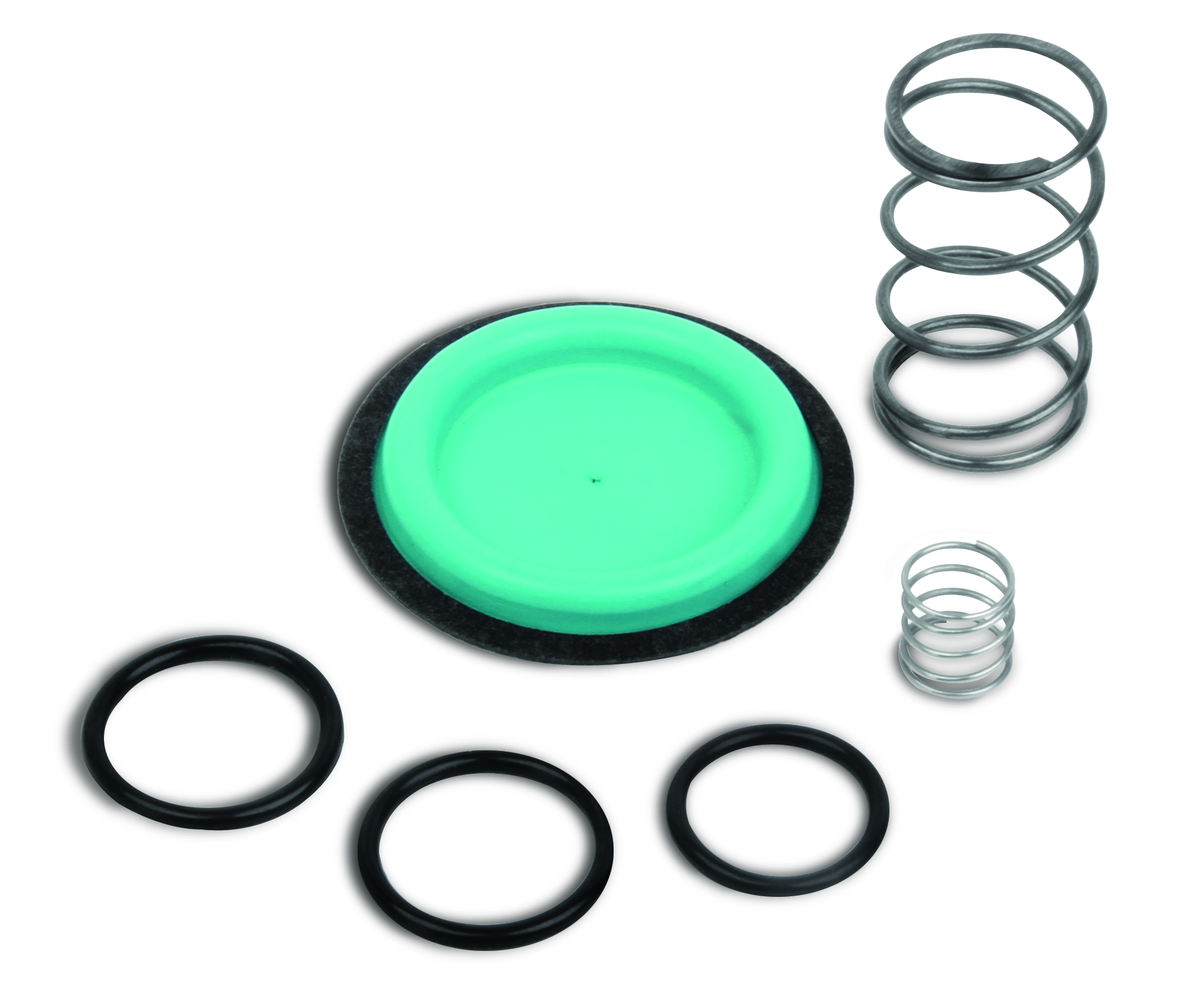 Over time, the diaphragm in any pressure regulator can wear out. QFT offers rebuilt kits that include a new GFLT diaphragm, O-rings, and springs.

For engine running multiple carburetors or several stages of nitrous, QFT’s billet regulator manifolds make to it possible to integrate 2,-, 3-, or 4 regulators into a single fuel system. In addition to enabling the same pump to provide fuel to multiple accessories, each regulator can adjust fuel pressure individually if necessary. 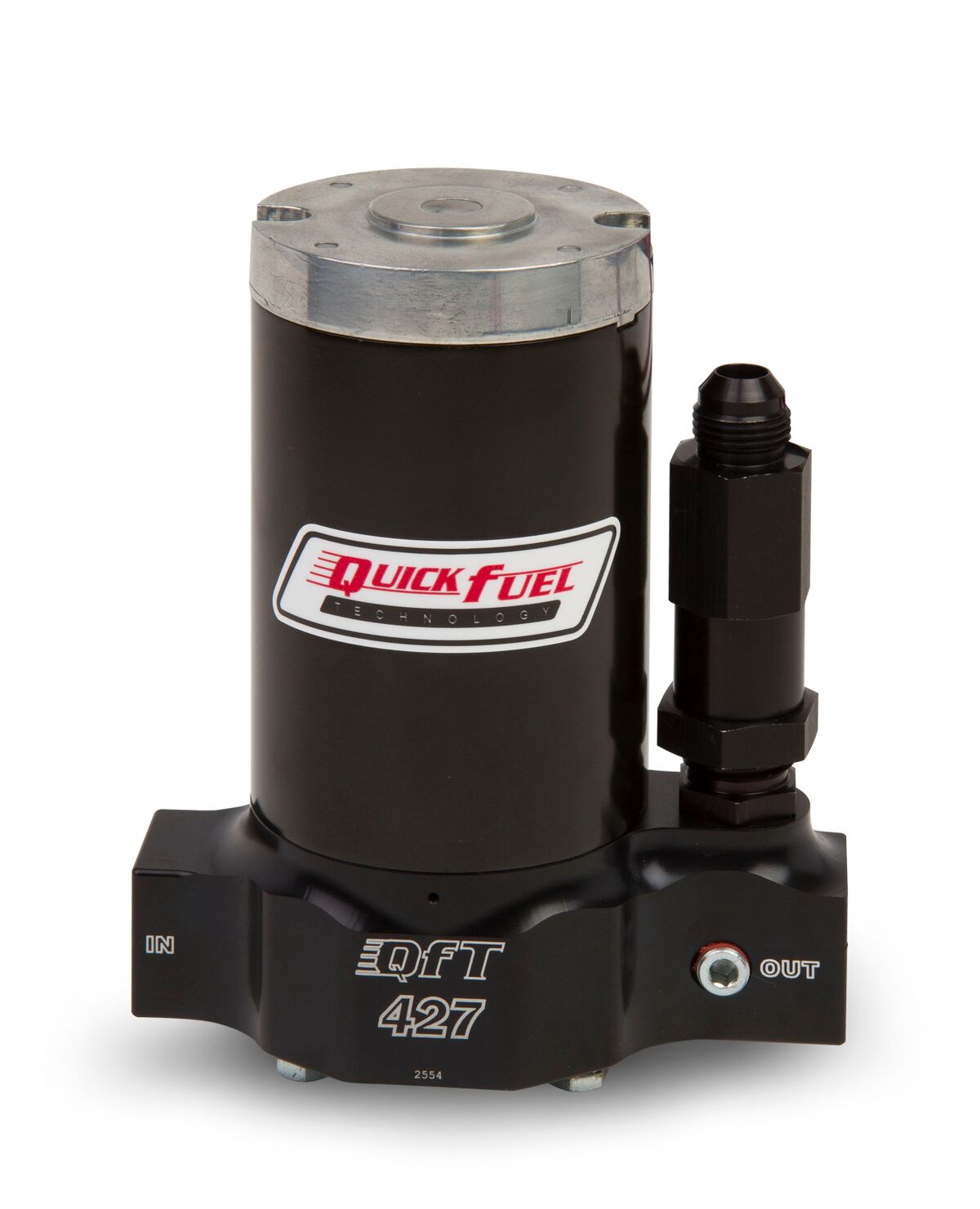 Simple fluid dynamics dictates that an increase in line pressure decreases fuel volume and flow. Consequently, by decreasing the line pressure between the fuel pump and the regulator, a return-style fuel system actually increases fuel flow. 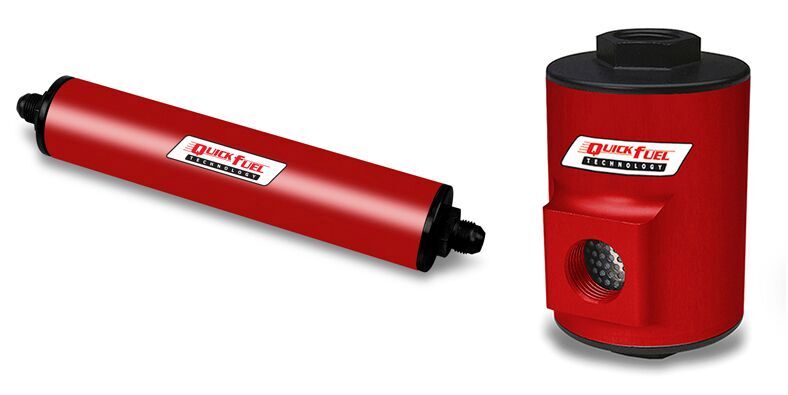 Adding a bypass regulator goes a long way in combating vapor lock, but the fuel filter shouldn’t be overlooked, either. A restrictive filter can lead to pump cavitation, which can create enough heat to vaporize fuel. QFT offers inline and canister filters ranging from 10- to 100 microns to fit both street and race applications.

Tags:tech, Quick Fuel, How To