After a week down in Las Vegas for the 2019 Spring Fling Million, I am finally caught up with all the things that need catching up on now that I am home!

While my overall round win performance in Las Vegas was not stellar, my equipment and I really did perform very well, and everything came home in one piece, ready to race another day. In this game, bringing home unbroken cars, engines, tow vehicles and trailers is a form of winning all by itself!

As this was a 4 day event with 2 entries, it may be a little long winded. But there is a few great pieces of detail that truly explain the advantage of having a quality data recorder on board. I literally received my Team Racepak 2019 package on Friday, 4/12/2019 and was in a rush to install as my plan was to leave town headed to Las Vegas on the evening of 4/14, after testing at Sacramento Raceway.. So I spent my birthday, April 13th, installing my new IQ3 Drag Dash in my dragster, removing the old AutoMeter STACK equipment (which I was never too fond of in the first place). The install went smooth. I have installed many, many Racepak systems in the past, so the most time consuming part was simply fabricating a filler panel in the existing dragster dash to accept the new IQ3. I will be honest, as my feedback and my updates will always explain the good and the bad... I had a couple issues with the new IQ3 after installation. First off, I will explain the self inflicted programming error I made. And I will explain why I am actually happy I made the error, HAHA! So I configured the dash, setup all my settings as preferred and as necessary, and went testing on 4/14 at Sacramento Raceway. The display function was fine, other than some very strange dash blinking and startup screens that had me a bit concerned, (I'll get to this later). The programming trouble, which again was self inflicted, was the inability to download runs. I messaged Cameron, and was told I likely had the wrong config file selected. I was sure I had the correct configuration, but looked again and again. I got to messaging with long time Team Racepak member Mark Collingwood, and we tried everything, to no avail. However, I am quickly building a great relationship with mark, and enjoy talking to him in general, even though our styles of racing are totally different. So I get to Las Vegas and call Cameron over to my trailer to fix this thing for me since I just can't figure it out. Sure enough, it takes him 10 seconds to show me that I did in fact, open up the incorrect config file, and after checking and rechecking multiple times, I let that one detail of opening the Drag Dash configuration slip past me and I was attempting to use the IQ3 configuration. Thanks Cameron, I love being proved wrong, as I promise, I really do learn from my mistakes! So onto the next issue. As now I can download my runs, I notice the RPM graph from the 4 runs I had made testing in Sacramento, and 1 run I had already made in Las Vegas had CRAZY RPM dips, spikes, interference, and completely unreadable RPM data. Cameron looked it over with me, and we decided it was probably an interference issue, so I decided to do some rerouting of my YELLOW RPM wire from the IQ3 to the ignition box. I had a spool of shielded wire in my trailer, so I decided to go ahead and splice from the yellow wire, to the shielded, and get to the ignition box with that shielded wire, and hopefully clean up the interference. Well as I stripped the insulation off the yellow wire about 2" form the IQ3 dash plug, the yellow wire pulled out from the dash, cleanly, without any exposed wire where the connector pin should be. I released the white slid lock on the connector and pushed that pin out of the connector, to find that it had been crimped, but did not crimp any copper wire strands. So by accident, I found that there was an assembly error that was only allowing intermittent contact of the wire conductor to the actual connector pin, which what was causing my dash to give crazy data, RPM spikes, dips, RPM activated record problems, and so on. I was able to salvage the pin, connect my shielded wire to the IQ3 and to my ignition box, and from that point on, everything worked flawlessly. 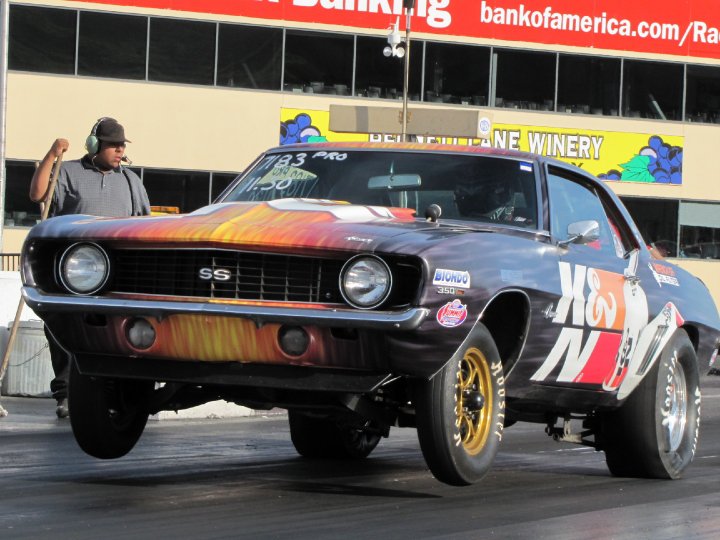 Wednesday in the Pro 38 category, driving my 69 Camaro, I got off to a really great start. The Camaro is a NHRA legal Stock Eliminator car, that I run regularly in bracket trim with a 383 Small Block Chevrolet engine. At the moment, I do not have any data recording capabilities in the Camaro, but eventually it will have a Racepak in it as well, and while not equipped with a Racepak yet, I proudly display my Team Racepak decals on the car..  In the Pro 38 category, delay boxes are not allowed. We race off the bottom bulb until we get down to the final car in the category. At that point, that final car receives a cash bonus, skips 1 round, and is then entered into the rest of the Super Pro field to race for the day's overall purse.

In the dragster, freshly equipped with a fully functional IQ3 Drag Dash, and proudly displaying Team Racepak decals on the body and the nitrous bottle, I turned it red first round by .006.

Thursday in the Camaro, I started my day off right again with a .003 reaction time to win first round, but gave the stripe back by .013 in round 2 for the early exit.

In the dragster on Thursday, I lost a close race with tight packages in both lanes. For some reason, the dragster slowed a bit, putting me in a spot that I could not win the round. The Racepak comes into play with this problem on Friday morning.

So Friday morning comes along, the bug day. $375,000 to win a bracket race! The biggest purse in drag racing history!

Of course, after 3 days of testing and racing, the weather on Friday is different than Tuesday, Wednesday, Thursday.

But today, we get to start things off with a time run, with a chance to win $50,000 with a perfect run package.

In the dragster, I am .015 on the tree, dialed 4.88, and out of nowhere I go 5.00. This car is much quicker than 5.00, I clearly have a problem. I download my Racepak, and the RPM graph alone clearly shows that I am way down on power. The car didn't rev or accelerate as it should have. But the graph is smooth, the run felt smooth, oil pressure and other vital data are all good. I check valve lash, I replace my MSD magnetic pickup on the crank trigger, and open up the distributor to find a loose rotor. But not just any loose condition... The adapter under the rotor is held in place by a single machine screw. that screw was loose and the phenolic plastic adapter that the rotor bolts to was cracked down the middle. All of the electronic data and ignition power that is generated before spark is generated and sent to the distributor looks great, so this broken piece in the distributor is likely my problem creating power loss, I replace the part, and I am now ready for Round #1. I will be making a Facebook post today on the Team Racepak page about how redundant data could have helped me find this problem even sooner.

So Pro 38, Round 1, I am racing 2 time world champ Brad Burton. I crush him on the tree, my .007 to his .037. We get to the stripe and it looks like I will have some room, I rip the throttle one time, to give him the stripe by .001 OUCH!! I am less than thrilled, and I'm headed to the buyback window to spend another 5-hunnid dollas. Pro 38 Buyback Round: I get to race another world champion. This time, it's 5 time world champion Justin Lamb. I have my worst reaction time of the weekend to this point, .019 to his .003. I felt like my light was decent, I see it's going to be close at the stripe, I don't think he's going to catch me, so at the last moment, I dump the brakes to protect myself from breaking out, and I give him the stripe by......go ahead, guess....  .001 AGAIN. That is 2 rounds in a row in my Camaro that I give back by 1 thousandth of a second EACH.

This is the biggest day in bracket racing history, and I manage to lose 3 rounds by a combined total of 5 thousandths of a second, 100% self inflicted. It may sound like I did a bad job... but truth be told, that's how tight this racing is, and if you don't go out there and attempt to execute perfectly every time, you might as well not be there. I drive very aggressively. If I see a window of .010 seconds I can tighten up, I am going to try to every time. Sometimes, like Friday, it costs me, most of the time it doesn't, and my driving style has proven to attribute many many wins, championships, trophies, and checks throughout my career.

Saturday: I could give you details about Saturday, but it would be more interesting to explain to you how nicely I was able to load my trailer than to report my horrible Saturday results, HAHA. The day after a huge day like Friday, and the long week that is the Spring Fling, in which I have spent months preparing for, just wasn't a good day in the race cars.

Beyond all of the on track activities, and things that took place in my personal pit, I am happy to report that I was a very sought after Team Racepak member over the weekend. I helped at least 10 racers with their Racepak and MSD Power Grid systems. From incorrect config files, driveshaft collar pulse settings, improper setups on automatic RPM recording parameters, launch retard timing curve programs, to Spool RPM wiring issues for pre-launch starting line control with the power grid. I also sold over 20 Stunna Stackers, and installed one on a dragster which got me some great posts and feedback.

So there it is, my Jesse Adams, Team Racepak 2019 Spring Fling Million update.

I will most likely be headed to Sacramento Raceway in 8 days to compete at the NHRA National Open, before heading to Murieta, CA for 2 weeks to participate in the Horsepower Wars 10k buildoff, Season 2.

Until next time, thank you Racepak, and Team Racepak,

this is Jesse Adams, and I will see you soon.