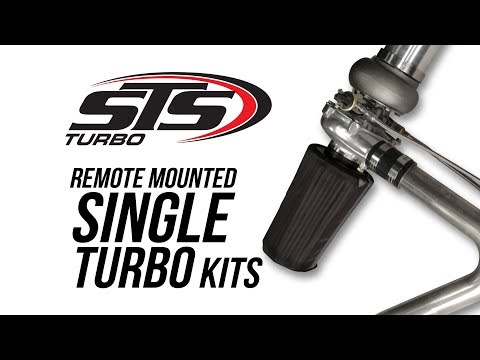 Designed for 4.0-5.0 liter engines and able support up to 620 horsepower at the crankshaft.

This remote mount single turbo kit gives you the groundwork to install a STS Turbo patented remote mounted turbocharger on almost any vehicle. The kit is designed for 4.0-5.0 liter engines and able support up to 620 horsepower at the crankshaft. STS Turbo overcomes the challenges of traditional installations by mounting the turbo in a remote location such as in place of the stock muffler, down low in the chassis, or even in the bed of a truck—basically it can be mounted anywhere since oil return is handled by our patented oiling system. This allows you to retain stock exhaust manifolds, catalytic converters, and mid pipes. The stock intake and throttle body are also able to be retained if desired. Relocating the turbo to a remote location helps avoid adding additional heat under your hood and you won't have to worry about clearance or interference issues with the belts, pulleys, or accessories in the engine bay. STS Remote Mount Multi Fit Turbo Kits include turbocharger, wastegate, air filter, patented oiling system, necessary turbo mounting flanges, along with a full color installation manual to walk you through the installation.

Instructions for STS1000
This kit does not include exhaust tubing, air intake tubing, or blow-off valve. All hot side and cold side piping will need to be fabricated.